Your browser is not supported. Please update it.
Home page
Website by GolfWorking

In common with many clubs founded in England in the late Victorian period, Sutton Coldfield Golf Club boasted a clergyman, the Reverend WCR Bedford as one of its founders. A drawing of him hangs prominently in the main room of the Club to this day.

The Park, comprising 2,400 acres, was originally part of the Great Chase of Cannock, but by the sixteenth century the encroachment of farmland had separated it from the Chase. This separation allowed it to be gifted to the citizens of the Town by Henry VIII through the agency of a local notable, Bishop Vesey – one of Henry’s Lord Chancellors.

The Club was founded in 1889 and at first played as a nine hole course laid out at the Town Gate of Sutton Park. The proximity of the Town Gate site to a centre of mass population meant that it was never likely to remain there for long. So, in 1890, the Club moved to its current site near the Streetly Gate of the Park. 18 holes were laid out by 1893 and a Clubhouse was built a few years later on a freehold site outside the boundaries of the park opposite the first tee. It must be noted however, that a game was played on as near as possible to the original course by Town Gate as part of the Centenary celebrations in 1989.

In 1892, dissention arose within the ranks of the then honorary lady members resulting in the club consenting to the formation of a separate ladies’ club. It was agreed that the course would continue to be used by the ladies who paid the club for the privilege and the club agreed that the ladies could have a new, separate clubhouse built on the site of the clubhouse. This position of there being an independent ladies’ golf club was extremely rare in the UK and lasted until the recent merger of the two clubs in 2019.

The First World War was, as for most other golf clubs, a crucial time for Sutton Coldfield Golf Club. The carnage of that war, carrying away so many young men, meant that the critical point of survival was approached very closely in, and after, those years.

Between 1913 and 1918, the number of male club members fell from 255 to about 125 and it was in that context that the Committee of the day demonstrated a degree of courage, surely envied by its successors. They approached Dr Alister MacKenzie of Leeds to revise the course to enhance its popularity. Dr MacKenzie has subsequently become one of the most celebrated golf architects in the world, but at the end of the war, he was only just beginning to emerge in the profession. 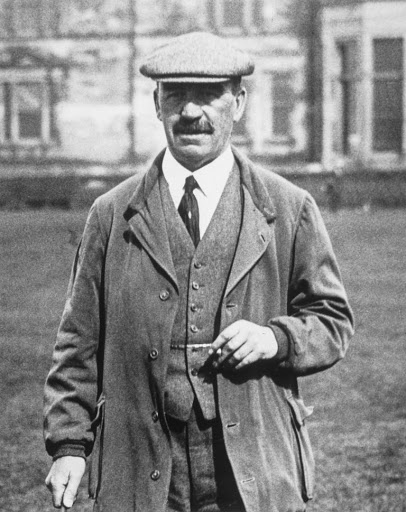 MacKenzie first visited the Club in 1919 and, showing no few qualities as a salesman at least, observed “The land on which the present course is situated is almost the best heathland I know for golf. If the suggested alterations are done, there is no reason why it should not compare favourably with the best inland course in Britain, and be vastly superior to many seaside ones”. MacKenzie’s plans were adopted after several modifications, but the project did not proceed quickly due to a serious grass fire in 1921. The fire burnt deeply into the peat in places and this contributed to a crippling financial debt only being avoided through the generous efforts of the members. Incidentally, the total refurbishment of a bunker in 2015 uncovered a layer of ash that had lain undisturbed since that fire 94 years before.

MacKenzie’s revised course opened finally in September 1934 and while many tees have been extended and supplemented by others and some bunkers have been changed, much of his work has survived.

Among the many events held was a Pro-Am that attracted Vijay Singh, Sam Torrance, Laura Davies, Manuel Pinero, Jose Rivero and Jose-Maria Canizares amongst others.

The roman road, Icknield Street crosses the course on its way to join Watling Street at what is now called the village of Wall. The past and the present envelop this course both on a bright spring morning and on a drowsy summer’s evening.

Away from all the hustle and bustle, the course is a fair, but frequently stern test, presented in idyllic surroundings which continues to attract golfers to become members of the Club.